Much of the power for Drafts resides in actions. Actions are can be used to export to other apps and services, to send messages and email – but also for simple things like inserting manipulating text in the editor.

An action consists of one or more action steps which do the actual work of the action, but also has basic configuration options and settings covered in this article.

To edit an action, swipe to the right on an action in the action list and select “Edit”. 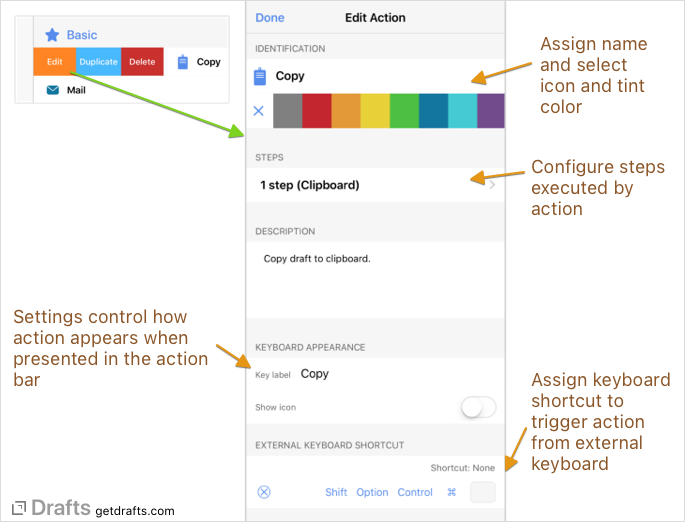 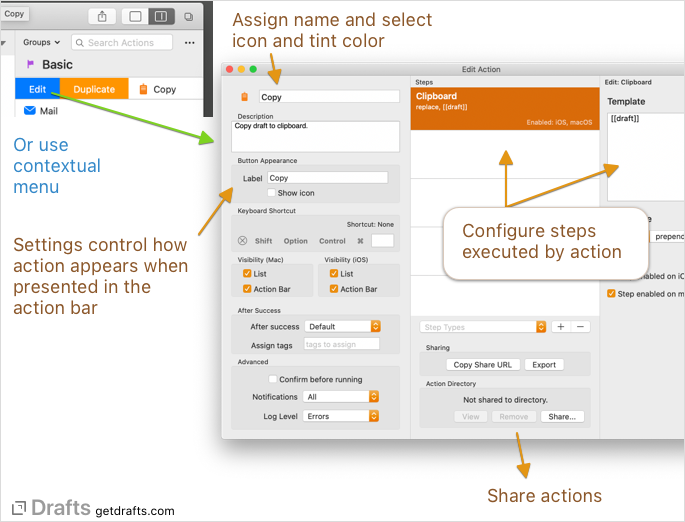 The action edit screen contains a number of advanced configuration options which affect how the action is run. 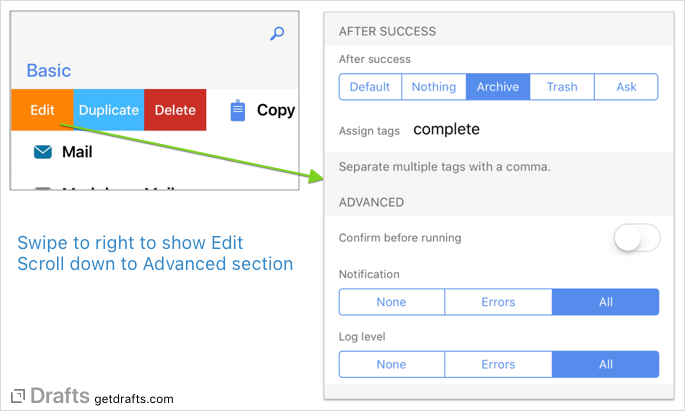 While Drafts is geared around making it quick and frictionless to act on drafts, there are sometimes actions which publish text, or update or overwrite files, etc., which you might not want to accidentally trigger with an errant tap.

If “Confirm before running” is enabled, whenever the action is run, a prompt will open to confirm you wish to run the action, with the option to cancel.

After the successful completion of an action, drafts can be filed away automatically using the “After success” setting.

After Success can be set on individual actions in their action edit view, or use a default set on the Action Group the action reside in. The default value on an action is “Default”, which will inherit the setting from the Action Group. The options are as follows:

If the after success is set to archive or trash the draft, and that draft is currently loaded in the editor, Drafts will also end editing of that draft. If focus mode is current enabled, the next draft in the draft list will be loaded. If focus mode is off, you will be returned to a new draft, ready to edit.

The after success settings on an action can also assign one or more tags to the draft. Place a comma-separated list of tags in the “Assign tags” field, and those tags will be assigned to the draft when the action completes successfully. This is a great way to file drafts - for example assigning a “tweet” tag to any drafts that were posted to Twitter with an action.

The notification setting determines whether Drafts will show a banner and confirmation sounds after running the action. The options are:

Actions generate logs of the actions execution which provide useful records of what actions have been performed on a draft, and what (if any) error occurred. These logs are available in the draft detail (i) view. Depending on the type of action, it may make sense not to log the execution of the action. For example, you might not need to know a history of each time you copied the draft to clipboard, or inserted a bold text markup with an action key.