Drafts supports task marks that can be tapped or clicked to toggle state. These are implemented using plain text markup, and vary by the syntax used by the draft. Task marks make Drafts ideal for use a simple list and todo manager.

For more idea about working with lists and tasks, see the Working with tasks and shopping lists tip in the forums.

What, exactly, becomes a tappable task in Drafts is defined in syntax defintions. Custom syntaxes can define addition types of tasks, but the built-in default “Markdown” and other syntaxes provide support for square-bracket based ([ ] [x]) tasks.

A few examples of tasks in the built-in syntaxes: 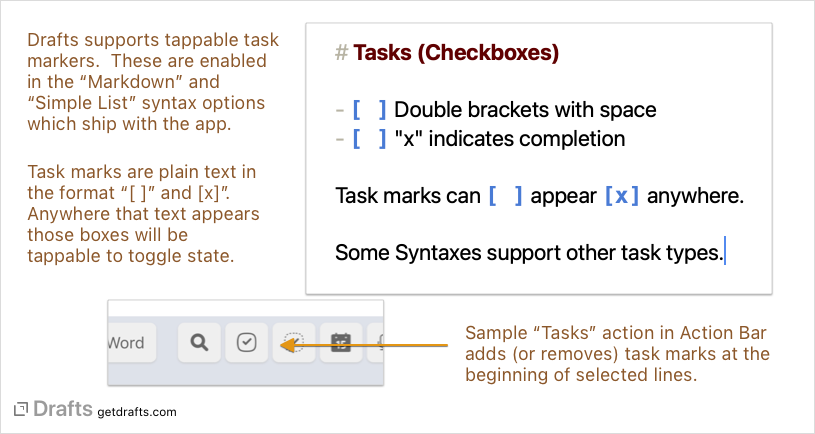 Tasks most commonly appear at the beginning of lines, but do not have to.

Because tasks can vary by the syntax used, be sure to check descrptions any custom syntaxes you use for details about task formats supported.

Since they are plain text, tasks can be created by just typing them, but that are also a variety - but actions are also available to work with tasks. For example, the Tasks action can be used to add or remove task marks from a whole block of selected lines.

There are other examples in the Directory, for things like moving completed tasks to the end, resetting task lists, and the like.