The current version of Drafts installs as a new, separate app and does not replace installations of Drafts 4. Migration will not affect your installation of Drafts 4. Both operate independently. Drafts and actions do not sync between versions, but they can be migrated from Drafts 4 to the new Drafts at any time. It is up to you to decide when you are ready to migrate.

Don’t want all the details? Just open the latest version of Drafts, go to Settings > Migrate from Drafts 4 to import drafts and actions from Drafts 4. 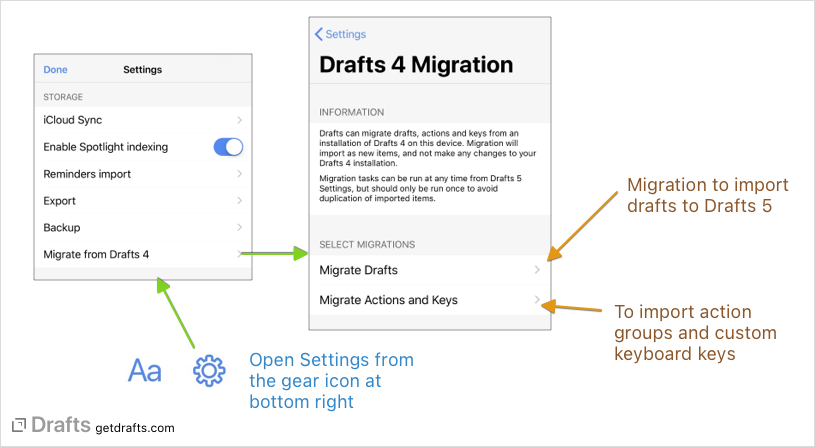 To migrate all drafts, visit Settings > Migrate from Drafts 4 > Migrate Drafts. If Drafts 4 is installed, the new Drafts will see Drafts 4 data, and migration will be available. A preview of the number of drafts to import will appear. Optionally, a tag can be assigned to drafts as they are migrated if you wish to mark the imported drafts for historical purposes. When ready, tap the Migrate Now button.

Migration is typically quite fast, but may take a short time to complete if you have a large history of drafts. It is recommended you allow migration to complete before exiting Drafts. Immediately after migration, Drafts will begin syncing data to iCloud. This may take some time as well on a large import, so be patient waiting for new drafts to appear on other devices.

Migrating Only Some Drafts

If you do not wish to migrate your entire Drafts history from Drafts 4, but want to move over only some content, you have a couple of options.

First, you can use the Drafts 4 export feature in Settings > Export Drafts can create an export file for only the inbox, for example. If you use this feature, and export as JSON format, and select Open in... > Copy to Drafts, you can import just the selected drafts.

Second, you can individually move select drafts using an action. In Drafts 4, install the Send to Drafts 5 action, and use it to send only the selected draft to Drafts 5.

A few things to know before migrating actions and keys from Drafts 4: 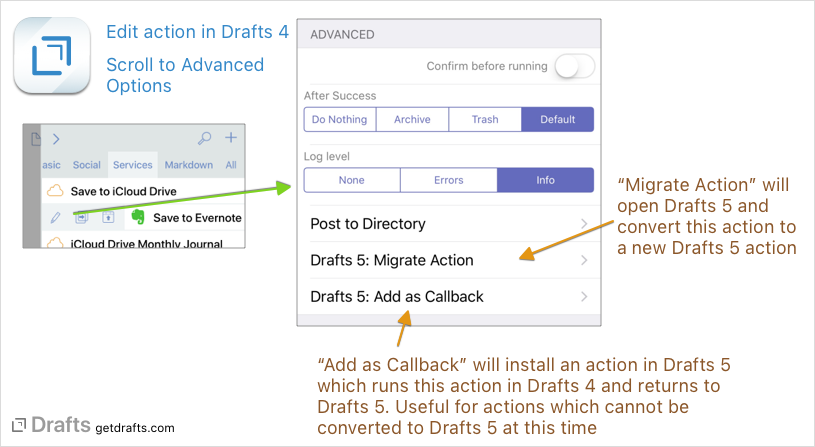 If Drafts 5 is installed on the device, the following options will be available: