As of Drafts 28 or greater, the Drafts Watch app requires your watch be running watchOS 7.1 or greater. If you are running a watchOS version below 7.1, the watch app will not be visible for installation in the Watch app on your iPhone.

Drafts watch app allows for quick capture on the go, as well as the ability to browse and manage inbox drafts. 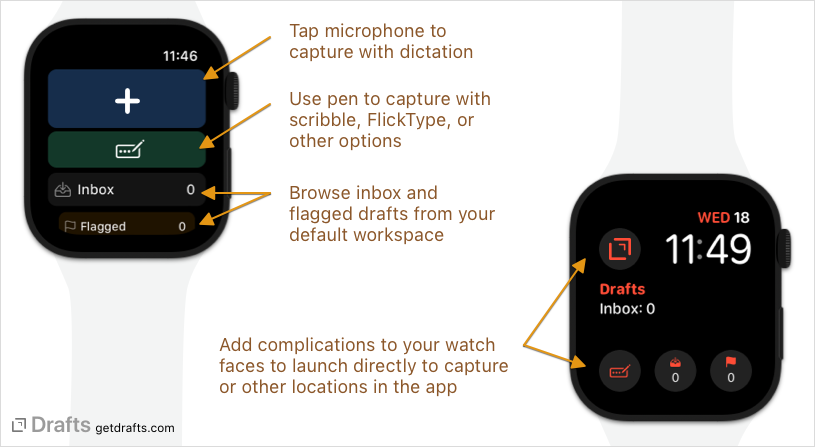 Once installed, you can launch Drafts from the app launch on the Watch. Drafts from your inbox on iPhone will be synchronized to the Watch and the following features can be used from the main screen:

The inbox screen provides a quick list of drafts in your inbox. Tap on a draft to view its detail view. On the detail, the following commands are available:

Drafts offers several types of watch face complications, each with its own associated function. All complication types are available for all sizes/types of complication, but may appear differently on different watch faces.

In Drafts Settings (gear icon at lower right), The Apple Watch section allows control over options for the watch app. Currently the following settings are available:

In general, the most reliable way to capture to Drafts is to use the capture complication to launch the app directly to Drafts, but the Drafts Apple Watch app also supports direct integration with Siri, using the phrase “Create a note using Drafts”.

Drafts offers integration with the excellent FlickType Keyboard app for typing directly on a QWERTY-style keyboard on Apple Watch. 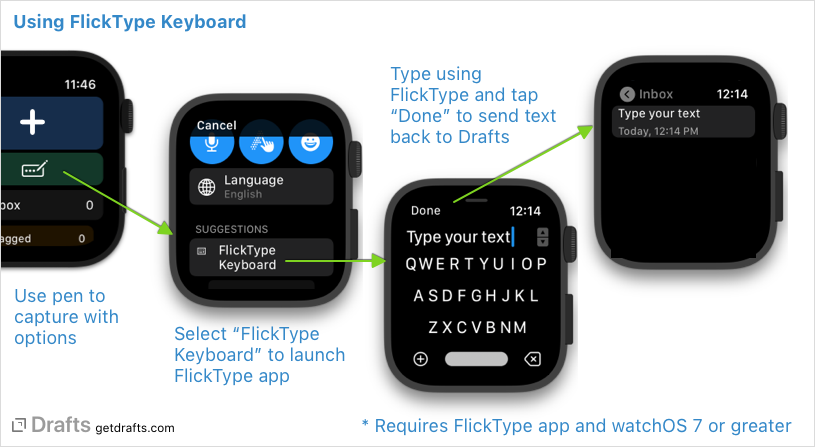 To use FlickType with Drafts:

This integration works by leaving Drafts to open the FlickType app, allowing you to type text. Once complete, tap “Done” in FlickType to return the text to Drafts. Capture will not be complete if you do not complete this step.

Interaction with the Phone and Disconnected Use

When your watch is paired and has an active connection with your iPhone, changes made on the Watch are pushed back to the phone more or less in real-time.

The watch app can be used while disconnected from the iPhone, with some limitations depending on the model and connectivity of your Watch. Dictation requires a connected phone or network to work. Other changes, will be stored on the watch and replayed to the phone when the devices are connected again.

Up until the release of watchOS 8 in the Fall of 2021, Drafts was able to open, either from a button in the app, or from a complication, directly to dictation to capture notes. Unfortunately, Apple made a change to the way text input works in watchOS–system-wide, not just in Drafts–and this is no longer possible.

All text input now opens to the on-screen keyboard on Series 7 Apple Watches, or the “scribble” handwriting interface on Series 6 or below Apple Watches, and requires an extra tap on the microphone button to reach dictation.

We are not happy about this change, and we have heard from many of you who are not either. We have reported this as an issue to Apple and encourage you to let them know if you would like to be able to get directly to dictation with a single tap.